Over the past two weeks we have witnessed big tech flexing their muscles against President Trump and against a social media site.

After a month of labelling Trump's election-fraud-related tweets as falsehoods and making those tweets either more difficult or impossible to share, Twitter has completely banned him from their platform. Facebook, YouTube, and other social media platforms then piled on top. Further, Shopify has taken down two of his online stores, and Stripe will no longer process payments.

Twitter did this over the incorrect claim that Trump incited violence at the Capitol last week. Meanwhile, Twitter says that China’s tweets stating that Uyghur forced labor camps don't exist are acceptable, despite the fact that such camps do indeed exist. Twitter is OK with censorship on US soil but is opposed to Uganda’s internet shutdown, since Uganda is violating basic human rights by doing so.

Twitter didn't stop with Trump – General Michael Flynn was blocked, as was Sidney Powell, and supporters of QAnon, along with many, many conservatives, myself included.

"We are focused on one account [@realDonaldTrump] right now but this is going to be much bigger than just one account and it’s going to go on for much longer than just this day, this week, and the next few weeks, and go on beyond the inauguration."

In brief, they're just getting started.

Big tech effectively muzzled the most powerful man on Earth, and that fact should terrify everybody regardless of political persuasion. If they can do it to Trump without consequences, then they can do it to anybody else.

The reaction by some people supposedly on the Right has been along the lines of "Twitter is a private company, they can do what they want. Just let the free market work. You can always build your own platform." This, by the way, is the same rationale given by people who support private businesses enforcing the social-distancing and mask edicts that certain state governors enacted in response to the China Flu.

Some on the Right did exactly that - they built their own platforms, one of which is called Parler.

Within the past few days:

So much for building your own platform.

If this isn't enough to dissuade the limousine libertarians from their position, let's apply their line of bullshit rhetoric to the Jim Crow laws. These were state and local laws that enforced segregation and were passed by Democrats to roll back the advancements made by blacks following the Civil War.

"This is horrible!" the limousine libertarians would say between sips of their caramel lattes while wondering if they need glasses for their myopia.

Yes, it is indeed horrible, but if they are consistent, they must condone this.

"But they're private businesses, they can do what they want!" the limousine libertarians bleat.

No, they can't do what they want. Being a business owner doesn't absolve him of the obligation to do what is right.

Further, in what sense are they "private" businesses? They lost that status when they became proxy law or edict enforcers - like with the enforcement of Jim Crow laws, or with tax laws, or with the companies that currently enforce China Flu restrictions. They lost it when corporations harvested and sold customer data without consent. Big tech companies certainly lost their status as private businesses when they interfered with and invalidated our elections.

The problem with limousine libertarians (they may be chauffeured in limousines, but they're usually the chauffeurs) is that they are silent in the face of oligarchy. Their "build you own" mantra is just a stale bromide used to cover their cowardliness while allowing them to feign enlightenment.

Republicans knew this would happen, that big tech would flex their muscles. Trump vetoed the NDAA in part because it retained the Section 230 blanket protections for big tech. U.S. Senate Majority Leader Mitch McConnell, who was himself briefly banned from Twitter in 2019, voted to override Trump's veto. Given the Republicans' refusal to investigate election fraud, this turncoat behavior is to be expected from them.

Politicians weren't the only quislings...

The extent to which a few patriot commentators are willing to accept all this is nauseating. A few days ago the host of one online video show stated that this is not a free speech issue since you, gentle social media user, agreed to their terms of service agreements.

You'd think such commentators never heard about individual rights: such rights, be they God-given or follow from our nature as rational animals, are not gifts from the state. Individual rights, including the freedom of speech, are inalienable, which means they cannot be transferred or signed away. So much for terms of service agreements.

This same commentator was excoriating Trump supporters for doing nothing but flying their American flags, having fun at Trump rallies, engaging in online arguments with Leftists - in other words, for enjoying the relative freedom that we had under Trump.

What should we do instead? One would hope that this commentator would implore us to be wolves instead of sheep. He didn't, he was too busy either wallowing in guilt or insisting that we wallow in guilt. No one told him that masochism has no place outside the bedroom.

The Politics of the Future

Conservative Twitter users are cutting their losses and heading to greener pastures. This loss of users won't just impact Twitter's customer count, but also the quality of the platform: Twitter thrives on conflict, and without conservatives Twitter will just be an echo chamber where liberals boast about their intersectionist brownie points.

Meanwhile, Trump seems to be experiencing an increase in popularity - we are seeing the Streisand Effect in action!

No reporter has investigated how the actual process by which the deplatforming of Trump and the attack on Parler were orchestrated - which is not surprising. Did we witness a series of independent actions, or were they coordinated? Are the CEOs acting on their own wokeness, or are they responding to a woke mob in order to appease them?

In Twitter's case, Jack Dorsey took the initiative, at least based on the Project Veritas video. Similar videos from inside Google show the same thing. This may or may not hold for other tech giants and doesn't address whether there is collusion among them.

Again, in this conservative cleansing, are the companies taking the initiative, or are they reacting?

In one sense, it doesn't matter - the companies are the ones doing the deplatforming and the election-rigging, and they richly deserve retribution for their actions.

If the CEOs are acting on their own initiative, then they are on the treadmill of politics, not technology and not business. Perhaps they will realize that this wasn't the reason they got into the IT business in the first place, but that's doubtful.

If they are reacting to the petulant demands of the woke mob, then the CEOs are blind cowards who evade the fact that mobs are never satisfied by appeasement or capitulation. In reference to countries that were neutral at the start of World War 2, Winston Churchill said:

This applies to corporations as well.

The answer to who is in the driver's seat ultimately answers another question: is America now an oligarchy or a mobocracy, the pure democracy that the Left wants? It is too early to tell, but something we know now is that businesses will be the enforcers of either alternative, and that their terms of service are more important than our Bill of Rights. 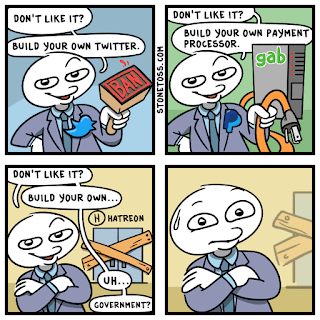 (From Stonetoss Comics)
Posted by Mike K at 5:13 AM