Adam Schiff and the Drag Queen 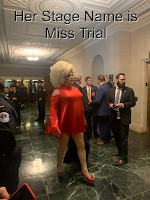 Adam Schiff and Eric Swalwell were in the private committee chamber, preparing for the start of the Thursday's hearings.

"Jeff Zucker is about to have my ass!" Schiff exclaimed.

"Didn't he already have your ass?"

"Not like that. He says we need more sex and sizzle!"

"Yes, yesterday's hearings tanked in the ratings, and we have two more days scheduled this week. Plus next week!" Schiff’s voice grew in volume and pitch. "Zucker is panicking!"

"I told you we shouldn't do this in open session."

Schiff leaned over this desk and said "here's what we're going to do..."

The chamber began to fill with politicians, lawyers, and journalists. They were joined by a drummer, who set up his kit in the back of the room.

Just as Chairman Schiff called the hearing to order, a person wearing a bright blond wig and hot red dress sashayed onto the floor while the drummer played a seductive vamp. All eyes were upon Miss Trial, especially the protruding orbs of the committee chair, Adam Schiff.

She leaned against his table, placed one of her thick legs atop it, hiked up her already short dress, and said "I'd like to go next," her voice gravelly and deep, almost a baritone. Miss Trial pulled Schiff's tie out from his jacket.

"I usually don't do women," Schiff stuttered nervously, beads of perspiration forming on his brow.

"Don't worry, neither do I," she said in her husky voice. The drummer did a rim shot.

Schiff immediately noticed how the top of her dress came far up her neckline, no doubt to cover her Adam's apple. A smile crossed his thin lips. "The chair calls Miss Trial!"

"No, the chair calls Misses Trial to the witness stand."

"That's 'MISS' Trial. And give me an introduction that's proper for a lady of my class and breeding, honey."

Schiff took a moment, then spoke into his microphone: "Straight off her nationwide Drag Queen Story Hour tour, and most recently appearing at the Illusions Night Club here in DC, I present... Miss! Trial!"

Thumping dance music filled the chamber, and half of the chamber exploded in applause as she walked to the table reserved for witnesses, their cheers of "stunning" and "brave" almost drowning out the music. Miss Trial gave a queen wave as she walked behind the table reserved for witnesses. She waited for Ambassador Taylor to pull out the chair, then she sat slowly, adjusting her seat by wiggling her bottom.

"If there's any doubt about this being a circus, well, the bearded lady just arrived," Devin Nunes said to one of his aids.

"Chairman Schiff, what does all THIS," Jim Jordan pointed to the person behind the witness desk, "have to do with Ukraine?"

"And what? He's obviously a good dress maker!" Miss Trial raised from her seat, did a pirouette, and stopped at just the right angle so that the chamber's floor lights maximized her cheekbones and minimized her linebacker build. She held the pose for a moment, then returned to her seat to more wild applause.

Schiff smiled. "See, Rep. Jordan, this will be valuable testimony from a relevant witness! Miss Trial, what do you know about the phone call between Mr. Trump and President Zelensky?"

"Volodymyr Zelensky? The president of Ukraine?" Schiff said this without even one note of exasperation in his voice.

"Oh that. Well, Sergei, my dress maker, said that his friend's brother's housekeeper has an acquaintance in the Ukraine office who heard that President Trump and President Z. had a phone call."

"No. My dress maker's friend's brother's housekeeper's acquaintance. Easy. Could someone fetch me a martini?"

"Miss Trial, alcoholic beverages are not permitted on the floor," Jordan scolded.

"Tell that to Nancy," she replied. Rim shot.

"Chairman Schiff, this is nothing but fourth- or fifth-hand rumors!" Jim Jordan pointed out.

"No, I was calling Representative Quigley a misanthrope. Miss Trial, have you ever even been to the Ukraine?"

"When was he last there?"

"In 2015. Sergei visited Crimea. He said the Russians left it a real shithole, but he also said he was able to get good blow from somebody named Hunter."

"The chair calls for a fifteen-minute recess!!" Schiff didn't even bother to try to keep the panic out of his voice.

Back in private chambers, Swalwell and Schiff were pacing, figuring out how to spin this.

Swalwell: "What are we going to do? This whole thing was a mistake!"

From the other side of the door, Schiff and Swalwell could hear a gravely baritone voice exclaim: "That's Miss TRIAL!"

Schiff eyes were protruding more than usual: "We need a therapy dog... and a distraction!"

"Not the whole mass shooting thing again," Swalwell sighed. "How long will people fall for it?"

"We'll maintain the appearance of having the moral high ground. It will work." Schiff opened his phone, dialed a number, and arranged for some sex and sizzle.