Dad is still pissed at me for dropping out of math class. He can be such a hard ass! Yea, I waited until it was too late to get even a partial refund from the university, but so what? Dad will pay for the class again next semester.

The math professor I had this time was a real task master, and he had it out for me since day one. On the first day of class, I asked him if we should clap or just snap our fingers so that people don't get triggered. His response was "neither, this isn't the Oprah Winfrey Show." When I pressed him on the issue, he said, "this is not a debate club, either."

I dropped that class because it was hard and that professor had high expectations for us. When I complained to him about it, he said that he was surprised anybody could graduate from high school and still need remedial math! Before I walked out, I told him that logic and reason are racist creations of white men used to oppress minorities. That's what I learned in gender studies last semester.

The university doesn't like students to shop around, but hopefully I can get an easy math prof next semester.

Yesterday was boring. I started to watch an American football game because I heard the players would be taking a knee during the National Anthem. I've heard about how players have been cussing-out fans for booing them, but that's OK: the players are part of an oppressed minority, and that's just payback.

I only watched the first 20 minutes of the game. I much prefer real football, or what ignorant Americans call soccer. American football is nothing but a capitalist bourgeois spectacle celebrating toxic hetero-normative masculine values. When will people learn that gender is just a social construct? Why can't America be more like Europe?

Today should be interesting, though, because I'm meeting with my friends Mohammed, Shaniqua, LaShawn, José, and Graham over at Starbucks.

Mohammed has always hated Graham because he's gay, even though Graham bends over backwards to kiss Mohammed's ass. Figuratively, not literally. I really thought Graham would drop out of our group after the Orlando shootings, but he's more enlightened than some of his gay friends. They actually want to ban Muslim immigrants, but Graham knew that the real problem was lax gun control laws. He lost some gay friends over that.

LaShawn, who is thinking about transitioning, is very active in the BLM - he says he's one of the few black men in that organization. "The rest are guilty-ass crackas," he says. BLM is all about fighting racism, and that's LaShawn's main issue.

José has been boycotting Taco Bell lately because they've appropriated his culture. José has been lying low, he hasn't worn his "Make America Mexico Again" hat in weeks. He's undocumented, and he doesn't want to go back to Mexico. He was originally going to skip tonight, but the La Raza meeting got cancelled.

There's always been an undercurrent of tension between LaShawn and José. Not sure why, though.

Shaniqua's an African-American woman and a lesbian. Her main issue is body positivity. She's tired of fat shaming. Even though she's 350 pounds, she still walks up one flight of stairs every morning and hardly wheezes. So much for gravitationally-challenged people being less healthy than everyone else! Shaniqua doesn't complain about my white male privilege, much. She's just made associate professor over in the Women's Studies Department, and I hear she's pulling a salary in the high five figures.

My friends can be kind of tiring with all their backstabbing and general cattiness, but they represent the diversity that is our future!

It is 10:30 in the morning, so I might as well get out of bed. It is still chilly - why do mom and dad always keep the basement so cold?

I look in my dresser - not too many clothes there, mom needs to do laundry. I've got a red Che Guevara t-shirt, but today is Friday, and I hear that people on the right wear red on Fridays to support the military. Nazi pigs! I'll wear my black and white AntiFa t-shirt instead.

I've only got one clean pair of blue jeans, but tomorrow is "National Coming Out Day" and I want to wear those on campus. Instead, I'll wear my skinny jeans that mom got me last week. Like I said, mom needs to get around to doing laundry.

So, only a few hours before that meeting at Starbucks.

You know, dad always says that I need some direction in life. I've made significant progress on that issue over the last 12 months, I think. This meeting is part of that progress.

Last year, I wished that my generation had a great cause, something that would get people to rise up and get organized. The government should get involved, and force people to get off their butts. I wished that there was something great I could do. I'm still mad at my math prof. He said, "we are standing on the shore of a great ocean" and "great men create great times." Sexist pig, assuming only males can be great! Didn't he know that it is society that makes the person? Any person's character can always be deconstructed into the effects that others have on that person. That's what my lit-crit professor said two semesters ago. Has Mr. Math Professor even heard of Derrida?

My generation now has a great cause - fighting Trump! We're organizing a "Resist Fascism" rally at this meeting. When I told my math prof that I joined AntiFa to resist Fascism, he asked if I was going to storm the beaches of Normandy. I don't understand what he says half the time. But whatevs, he's a white male, and he can't see the world as it is because of his white male privilege.

We are resisting Fascism, and that's a worthy cause!

I get dressed and go upstairs. No one left me lunch, and the only thing to eat was some cold pineapple pizza. I'm vegan, so dad has them hold the ham. Animal rights are very important to me, that's why I'm vegan.

I guess I'd better get ready for the meeting at Starbucks, so I need my MacBook and my hammer and sickle flag. Mom won't be able to give me a ride today. That's OK, our carbon footprint is too large. I'll just take the bus.

My Apple MacBook has finished charging. How I love that MacBook! Thanks, mom and dad, for getting it for me! Apple's CEO is gay, and they had Michelle Obama speak at one of the developer conferences earlier this year. Those two things right there make Macs better than Windows machines any day! The best tech companies fight for progressive causes, and aren't afraid of getting rid of employees who question this. Good for them!

Side note: I'm really looking forward to the new iPhone X. The web page announcing it has absolutely no photos of lilly-white males using it! Dad says he'll get me one when they come out!

Anyway, my MacBook is ready to go.

What else should I bring? The first time I went to an AntiFa meeting, I brought poster-board and magic markers, thinking we'll be making signs. I was told that the signs will be printed for us. Less work for us! Great!

Wait, I almost forgot my Communist flag with the hammer and sickle on it! Where is that flag? Oh yea, the police confiscated it and the flagpole it was attached to when my friend used it to stab a police horse in the neck. Her bail was set at something huge! The government isn't enlightened - who cares that the flagpole had a nail in it? The horse deserved it, working for the hegemony like that. I'll never see that flag again.

I'll just ask mom and dad to pick me up another hammer and sickle flag - they've always indulged and supported me. I'm only 25, no one can expect me to buy one of those on my own! 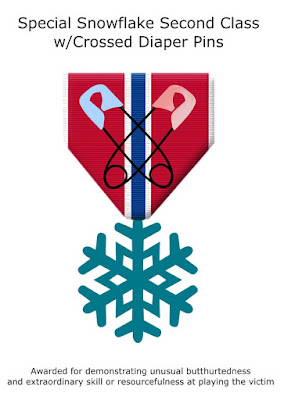