Senator Joe Biden (yea, that Joe Biden) was chair of the Senate Judiciary Committee during the confirmation hearings for both Robert Bork and Clarence Thomas.

Prior to his nomination, Bork was best known for his role in the "Saturday Night Massacre": Nixon ordered AG Richardson to fire special prosecutor Archibald Cox who was investigating Watergate. Richardson refused and resigned immediately. Nixon next ordered the deputy AG to fire Cox, and HE refused and resigned immediately. Nixon, working down the chain, then ordered the #3 man at the DOJ to fire Cox, and Cox was indeed terminated. All this happened in one Saturday evening.

"Robert Bork's America is a land in which women would be forced into back-alley abortions, blacks would sit at segregated lunch counters, rogue police could break down citizens' doors in midnight raids, and schoolchildren could not be taught about evolution, writers and artists could be censored at the whim of the Government, and the doors of the Federal courts would be shut on the fingers of millions of citizens."

Histrionics at that level were very uncommon at the time; today it is TV as usual. Further, a report was prepared for Biden (called the "Biden Report") which was used to fan the histrionics. Today, such a report is called "opposition research."

Most of the furor during the confirmation hearing was generated by women's rights groups and pro-choice groups, fanned by Kennedy's speech. And there was that Biden Report.

Bork's confirmation hearing is the first modern example of the confirmation process being driven not by careful deliberation but by public campaigns and character assassinations. This new process was described with a new verb: "borking". That verb was later replaced by "swiftboating".

The Senate voted against Bork's confirmation. Afterwards, Bork said that the Biden Report "so thoroughly misrepresented a plain record that it easily qualifies as world class in the category of scurrility." About Ted Kennedy's speech excoriating him, Bork said that "there was not a line in that speech that was accurate." A reporter later said that while that may be true, Kennedy's speech "worked".

The SCOTUS vacancy would instead be filled by Anthony Kennedy.

Racism was on display throughout Clarence Thomas' confirmation hearing.

"This is not an opportunity to talk about difficult matters privately or in a closed environment. This is a circus. It's a national disgrace. And from my standpoint, as a black American, it is a high-tech lynching for uppity blacks who in any way deign to think for themselves, to do for themselves, to have different ideas, and it is a message that unless you kowtow to an old order, this is what will happen to you. You will be lynched, destroyed, caricatured by a committee of the U.S. Senate rather than hung from a tree."

Afterwards, one reporter said: "I don't care if Clarence Thomas had an inflatable doll on his sofa and a framed autograph from Long Dong Silver on the wall. Just because a man has an immature interest in dirty stuff doesn't mean he harassed anyone."

The Democrats used the same playbook on Bork as on Thomas: treat innuendo as fact; pretend to be shocked, shocked!, at the supposed outrages against decency; stipulate that Western Civilization would fall; and if all that fails, find someone willing to accuse the candidate of sexual harassment — and that accuser will disappear and soon be forgotten afterwards. The Democrats did that to Roy Moore. They are doing it with the #MeToo movement. They're trying to do it against a former OSU wrestling coach. They are doing it with President Trump. And they will do it on Brett Kavanaugh, Trump's new SCOTUS nominee.

The difference is that four years passed between Bork's and Thomas' confirmation hearings. Now, this level of manufactured outrage is a daily occurrence. Eventually people will figure out that the sky is indeed not falling. 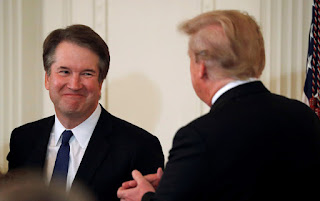