Reality Bites Back: A Review of Scott Adams' "Win Bigly" 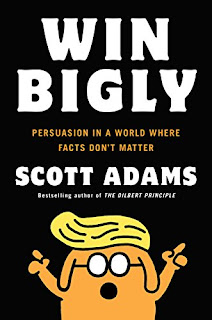 Scott Adams' latest book, "Win Bigly: Persuasion in a World Where Facts Don't Matter", describes the approach he used to predict Donald Trump's winning of the 2016 election. His thesis is that Trump is a "master persuader," similar to Steve Jobs, who has a "skills stack" (Adams' words) that naturally allows him to persuade people to rally to his side, and this resulted in his victory. This is one theme in "Win Bigly". A second theme that Adams did not intend to include, I believe, is what I'll call "the revenge of reality" theme.

Throughout the election, many people were comparing the policies of Bernie Sanders, Hillary Clinton, and Donald Trump.

Other people, myself included, were concerned about the candidates' overall ethics and politics as well as those of their supporters. Observing a candidate's supporters is crucial. The candidates themselves are slick and polished; their supporters aren't, so their words and actions are far easier to unravel. The Berkeley riots in response to Milo Yiannopoulos' visit told me all I needed to know about Hillary. I'm a died-in-the-wool America Firster Deplorable, and while I supported Trump, I did not believe he would carry his political philosophy to its natural conclusion, nor would he understand the causes that would block him from reaching that goal.

Regardless, those two approaches (policy and philosophy) attempt to answer the question: who will make the best president, should he or she win? Adams realized that neither of those address another question: who will win? In order to answer that, he examined the techniques each candidate used to persuade the electorate to vote for them.

Adams begins his book by describing his experience as a persuader. He is a trained hypnotist, and a lifelong student of the art of persuasion. He calls himself a "commercial-grade persuader".

To get the art of persuasion off the ground, he believes that it is necessary to take what can be called an "anti-realist" approach to how individuals know the world around them. His theory is that people cannot know the world - that we are living in a world where facts don't matter. By this, he isn't talking about temporary ignorance, or ambiguities, or "fog of war" type nescience, but rather an actual inability to know. In support of this he sites anti-realist philosophers like Kant, various marketing experts, and quantum physicists. "All we have is probability and strangeness," he claims.

Adams goes on to say that this doesn't apply to mundane tasks like balancing your checkbook, only the important things. "...[F]acts and reason don't have much influence on our decisions, except for trivial things, such as putting gas in your car when you are running low. On all the important stuff, we are emotional creatures who make decisions first and rationalize them after the fact." Which side do the steps needed to split the atom, or put men on the moon, or perform open heart surgery, belong - trivial or important? He doesn't answer that.

Instead, Adams claims that people view the world through interpretations or "filters". How does one choose among different filters? He uses two standards:

One of the funniest chapters is the one where he describes the various filters he went through while growing up - starting with the Santa Claus filter, going through the church filter (which makes predictions only after one has died), through the marijuana filter, finally ending with what he calls the "persuasion filter".

The persuasion filter is not to be underestimated for, as Adams points out, it is sufficiently powerful to undermine even the scientific method. Just look at "climategate".

Adams recognized Trump to be a master persuader very early. He didn't start the campaign as a Trump supporter; rather, he was impressed by Trump's persuasive abilities and entertainment value. This was enough to trigger Hillary supporters and Internet trolls, which resulted in Adams being the target of intimidation.

As the campaigns continued, Hillary used backdoor means to eliminate Bernie Sanders. These would not work on Trump, simply because those techniques would not play well in public. She had to up her game in a manner that would grant her victory without appearing even more slimy in the public light. This is when the "pussygate" recording was made public, which caused Adams to temporarily switch his endorsement to Gary Johnson, as he "is the candidate who touches only himself."

Those of us who are skeptical/cynical of politicians knew that the importance of the recording wasn't in the content, but rather in how it was being used: as a tool to paint Trump as a womanizer. By implication, those on Hillary's side were pure as snow, like Bill Clinton or Harvey Weinstein. Thus pussygate didn't get much traction.

So, Hillary and her supporters began the allegations describing Trump as "dark", racist, Islamophobic, racist, homophobic, racist, sexist, Nazi... racist. Rhetoric of this scorched-earth kind cannot stick only to Trump, but carries over to his supporters. Indeed, it is designed to spill over in that manner: "people believed Trump was as bad as Hitler, and by extension that marked his alleged propaganda chief (me) for death as well."

Adams was genuinely concerned for his safety and for that of his friends and family. He changed his endorsement to Hillary "for his own safety". You can tell that Adams lives in northern California: threatening violence against another would be unacceptable anywhere else, we have too much integrity to tolerate such threats. In other parts of the country, the snowflakes resort to economic retaliation.

A died-in-the-wool anti-realist would say: friends and family are concepts that exist only in my mind. How do I know that they are in danger? And if indeed it is a fact that they're in danger, it doesn't matter, since... facts don't matter. Fortunately, Adams dropped his anti-realism and came out swinging: "this was not politics. This was bully behavior, plain and simple. And it flipped a bit in my brain that couldn't flip back."

We know the rest of the story: Trump won the electoral vote, the snowflakes had a tantrum of seismic proportions, and the media continues as leftist propaganda machines.

Adams ends the book with a discussion about how persuasion relates to casualty: did his predictions actually cause Trump to win? Predictions are but guesses - when they come true, they are prophecies; when they don't, we salvage the situation by calling them allegories. An anti-realist cannot make that distinction.

Would I recommend this book? Yes, because the author expresses interesting insights into the art of persuasion, and applies those insights to electoral politics. Filter out the anti-realism, and a very strong book remains.

Let me end this review by making a prediction of my own: Trump will be stymied throughout his term of office by what is coming to be known as the "deep state". He will be slow to understand the fact that the deep state is what we ourselves are supporting, and that the easiest way to stop the deep state is to excise it like the cancer that it is.