No politician in Detroit is fit to manage their own bank accounts, let alone that of a whole city. Which means... outside help.

To follow this bad idea with a worse idea, Snyder then proposed bringing in 50,000 skilled immigrants over the next five years to revitalize the "motor city".

In other words, Detroit is now the equivalent of a third-world country, and the politicians are now trying to populate it with third-world workers.


Snyder is yet another Republican, abandoning working class people. With Republicans like these, who needs Democrats?
Posted by Mike K at 2:17 PM No comments:

Bracken's Books on Amazon, Free on Jan 15th and 16th

Matt Bracken will be making all three e-books in his "Enemies" series available on Amazon for free on January 15th. Hooray, and thank you Matt!

The impact of dystopian fiction is sometimes weakened because of "scifi" aspects (think of the movie versions of "V for Vendetta" or "Logan's Run"). There is little of that in the "Enemies" trilogy, and the result is that the novels strike close to home - sometimes too close! Here's a review (titled "One character's plight...") I posted on Amazon on February 4th of last year.


Matthew Bracken's "Enemy" trilogy is well written, but I am attaching this review to the third installment, "Foreign Enemies and Traitors" because of one particular scene...

There is a character named Doug who describes how his university tuition was tripled as a means of coercing him to join the military. The same thing happen to me in 1984 in Ohio. Unlike that character, I resisted, and left the university. However, the fact that an event like this was mentioned at all literally brought tears to my eyes - and that doesn't happen often!

Politicians of both parties, though they have their (staged) disagreements, like to pretend that we're all one big happy country. We're not, but the way they maintain this illusion is by marginalizing and ignoring those who question authority, demand accountability, and care about individual rights. Over the course of the trilogy, Bracken presents how this marginalization and "sweeping under the rug" occurs, and what the consequences not only could be, but actually are.

I'm not sure the power of that particular scene would have on somebody who hasn't been in that character's position, but it was certainly quite moving for me.

Two of Matt's other books, "Castigo Cay" and "The Bracken Anthology" will be available on the 16th. I've not read "Castigo Cay", but the anthology is a mixture of short stories and essays, mostly essays, that are worth reading. One of the essays, "When the Music Stops", describes a scenario that starts when the back-end to the EBT card (food stamp) system goes off-line for an extended period of time. This essay was written in September 2012, over a year before the EBT system really did crash; many of the consequences predicted in that essay didn't occur - but the system was offline for only a few hours. Prescient, no?

Here's a link to Matt's author page on Amazon.

Gates' publicity machine is working overtime, dropping snippets that promise insight into those four administrations. Personally, I'm interested in his time at Texas A&M - the revolving door through which politicians/regulators/administrators and academia pass deserves as much attention as the revolving door between the regulators and lobbyists.

After leaving the Obama administration, he accepted - and still holds - the chancellorship of the College of William and Mary.

The memoir, being written by a beltway insider, has also generated pre-release panning by Gates' detractors. A fine example of this is "Robert Gates's Narcissistic 'Duty'" by former CIA analyst Melvin Goodman. Previously, Goodman attributed the CIA's policy of "sexing-up" intelligence reports to Gates. In this latest essay, Goodman describes Gates as a "sycophant in all of his leadership positions" and "[f]or the most part, Gates has been a windsock when it came to policy decisions and typically supported his masters."


"Regarding Gates’s selection in 2006 to head the Defense Department, I encountered many key Senate staffers who opposed his appointment but believed that it was important to abort the stewardship of Rumsfeld. At that time, I labeled Gates the 'morning after' pill."

We don't need to wait for the memoir for certain insights, though...


"In many ways, the most stunning aspect of Gates’s national security stewardship was his reappointment at the Defense Department by President Barack Obama in 2009. Indeed, the appointment of Hillary Clinton and the reappointment of Bob Gates were rather cynical gestures, naming Clinton to keep the Clinton Foundation (Bill and Hillary) inside the White House tent pissing out instead of outside the tent pissing in.

"Gates was left in place so that the President could signal to the uniformed military that there would be no significant changes at the Pentagon. Gates's Cold War ideology (which caused him to miss the end of the Cold War) and his politicization of intelligence were completely forgotten."

Will 'Duty' be a rationalization of and apology for his actions and those of his bosses? Perhaps. Will it be a fount of insight? Maybe. Will it be easy to separate the former from the latter? No.

How Chris got his Groove Back 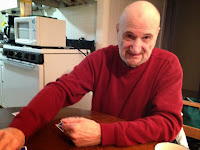 If "Grizzled Veteran" were a term in the dictionary, a picture of my friend Chris would be next to it. People would approach him, shake his hand, and thank him for being in the military.

Now Chris usually wears a yellow Army jacket when weather turns cold, but when he visited here in early November, though, he was wearing a blue jacket that belonged to his late brother. Apparently, the zipper on his Army jacket broke. 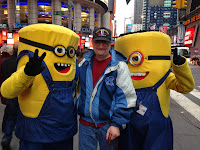 No stranger thanked him for being in the military while he was here in Pennsylvania, nor while we were in New York City.

A plan was formed!

When I was at his house over Thanksgiving, I broke into his car and stole his Army jacket - not as exciting as it sounds, the car was unlocked. The jacket then made a trip back with me to Pennsylvania where it was repaired and dry-cleaned. Then it was wrapped in bubble wrap, put in a box with the lint-roller the dry-cleaner provided. Add some wrapping paper and a bow, and you have a great Christmas gift! 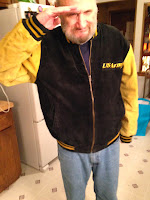 We exchanged gifts at Chris' house in Columbus. He opened the box, was puzzled by the lint-roller, then opened the bubble wrap, and unfolded the jacket. He was speechless for a moment, then tried the zipper.

The day after Christmas, we did dinner and a movie. In the brief time we were out, two complete strangers came up to him, shook his hand, and thanked him for being in the Army.

And that is how Chris got his groove back!
Posted by Mike K at 10:01 AM No comments: