Gillette's new commercial opens with a montage of real-life and on-line bullying, men cat-calling, a row of men standing behind a row of barbecue grills chanting "boys will be boys." It continues with scenes of "mansplaining", "toxic masculinity", and a news announcer decrying sexual harassment, thus making tie-ins with the #MeToo movement. Throughout the ad, the sanctimonious narrator asks "Is this the best a man can get? Is it?", thereby mocking Gillette's 30-year-old motto "the best a man can get." Near the end it shows men standing up to sexual harassment and stopping bullies. The commercial finishes with the obligatory link to a .org website.

This advertisement was made by Grey Advertising and was directed by Kim Gehrig, who produced last year's "Viva La Vulva" commercial that featured singing sock puppet vaginas.

Grey Advertising may or may not subscribe to P.T. Barnum's maxim that "there is no such thing as bad publicity," but they certainly advocate the older version of that phase: "success through scandal" ("succès de scandale"). But success for whom: for Gillette or for the advertising company?

Commercials are supposed to maintain a customer base and encourage others to use their product. Does the new Gillette commercial do either? It does - especially if you use one of Gillette's competitors.

Commercials are supposed to sell a product, not to proselytize. The act of shaving is just that: shaving. If you do it in the morning, you do it to look it to look professional, not to virtue signal.

Commercials are supposed to generate profits. Does this advertisement do so? It's too early to tell for Gillette and parent company Proctor and Gamble, though they did promise to pay $1 million per year for three years to "worthy nonprofits." So profits were generated for somebody besides Grey Advertising.

Here's the real problem with Gillette's ad: it is condescending AF. It portrays men acting as gentlemen and interfering with bullies as something new and hip and edgy, not as ordinary chivalry that was commonplace before the rise of the soy boy and the culture of victimhood.

Further, imagine if the ad decried the bad habits of Muslims, blacks, gays, etc — there would be an uproar! Instead, the ad is about the bad habits of men, so not only does it get a pass, the commercial is lauded by AdWeek for "flipping the narrative" and Gillette is celebrated for being "woke."

Finally, if there is any honest substance to the #MeToo movement, doesn't Gillette's new commercial trivialize that substance? Indeed it does, for the ad is basically saying: "I wake up in the morning feeling guilty for having a penis and balls. I'm not yet ready for gender reassignment surgery, so whatever should I do? I know, I'll shave with a Gillette razor, thereby symbolically castrating myself!"

Am I "triggered" by that ad, like certain news outlets claim I should be? Nope. Am I tired of companies committing suicide by becoming politicized in general, and by shilling for the left in particular? Yup. Right now, I'm laughing as I order razors from the Dollar Shave Club. And Grey Advertising is laughing all the way to the bank. 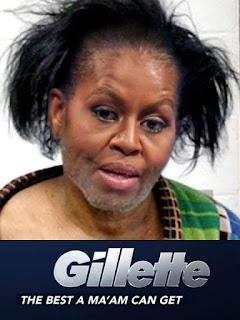