Certain Christian sects have a proud tradition of "witnessing" - the adherents believe that they are in this world to witness tragedies, to minister to the sick and injured, and to spread the Word, thereby making the world a better place.

There is a secular version of this activity that is extremely relevant today: being an independent journalist. With mainstream media resigning themselves to being propagandists and high-profile agent provocateurs, an alternative is needed. Take for example the MSM coverage of AntiFa: you almost never see photos of them carrying hammer-and-sickle Communist flags, but they do. Without direct witnessing (observation), most people wouldn't know that they indeed fly that flag. 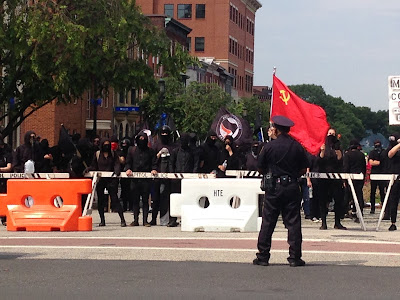 There is an activity that can be confused for witnessing, and that is "photobombing". By this I mean the insertion of oneself or one's group into a situation where they have no purpose being - beyond gathering publicity.

The presence of militias at the riots in Charlottesville, VA, is a perfect example of photobombing.

The primary participants in the riots were AntiFa and various neo-Nazi groups. Any reasonable outsider would have stayed at home and cheered as the two sides tried to kill each other, or they would attend only in order to witness events and spread the words that MSM reporters are loathe to speak.

Certain members of various militias decided to insert themselves into that mess with the stated goal of keeping the two sides apart.

In what situations should a militia or militia-like group take action? Here's some criteria. Action should be taken if one has proper:

How many members of the militia had training in urban operations, crowd control, etc? Of the people who went to Charlottesville, few if any.

Did they have the right equipment? None of the photos of the event showed them possessing riot gear, like face protection or shields. But they were "tacticool".

The militia presence consisted of about 32 people, not nearly enough do crowd control.

Then there is the mission: was there a clearly defined mission, carefully planned, with criteria for both success and failure, as well as a timetable? No.

Finally, there's the issue of authority. If Charlottesville law enforcement had deputized the militia members, then perhaps they would have a purpose there. They would be part of a well-organized law enforcement organization that did have proper training, equipment, manpower, mission, and authority. Trouble is, they could borrow the equipment but they could not borrow the training, so again they would be ill-prepared.

Did the police even want the militia there? There may have been a gentlemen's agreement, but nothing in writing.

Yet, there the militia was, where they had no business. They photobombed the riots.

Another disturbing aspect of the militia's participation is the large amount of media coverage it generated. The MSM lumped the militiamen together with the white supremacists. It didn't help that the militia members forgot to scrub their uniforms, and one was photographed wearing a Confederate flag on his uniform.

There was only one seemingly positive report about the militia's presence, a Washington Post article. The writing was so nebulous that it could be read as either a glowing review or a damning condemnation of the militia. An analysis of this article can be found on the Patrick Henry Society website which examines the ambiguity in the WaPo's article, and eviscerates the story as well as the subject of that story.

All this gave the militia a black eye, but other acts made it worse. One militia member created a "Hug a Muslim" video, and he also made overtures to the BLM, despite their explicit racism, in order to prove that militias aren't racist. What happens should the BLM start rioting while the militia is standing next to them? No comment.

Unlike some other people in the patriot community, I do believe that a professional and effective militia is a possibility. It requires eliminating drama and favoring substance over optics. It requires a lot of training from veterans, and the first step is for militiamen to shut up, work hard, and learn from the training. Even then we will never be as good as they are, but that's OK. We just have to be good enough to protect that which we value.