The shortest distance between two points is a straight line. This maxim holds not only in geometry, but in business as well. In that situation, the two points are the producer of goods or services, and the customer. The transactions between the two, for it to be "businesslike", must not involve any interference by any agency, government "service", third party, or side issues. No diversions must come on the shortest path between producer and customer.

This singlemindedness is the hallmark of a good businessman, and a similar thing holds for any person with any talent: no irrelevancies allowed.

Unfortunately, American businesses have forgotten that: they allow distractions to enter. Like politics, for example.

We've seen National Football League player Colin Kaepernick kneel at the playing of the national anthem. He's protesting "a country that oppresses black people and people of color". In 2016, he had a base salary of $11,900,000, a roster bonus of $2,000,000 and a workout bonus of $400,000, according to SpoTrac. Poor Colin. Poor, poor Colin.

We've read Starbucks promise to hire 10,000 refugees over the next five years in the 75 countries in which they conduct business. Will these include the Starbucks that anti-Trump protesters destroyed during the inauguration? How about the Starbucks destroyed by the rioters at UC Berkeley?

These issues are nothing but distractions from the respective purposes of the NFL and Starbucks, yet they are allowed to happen.

The organization of these protests started in the Comcast Silicon Valley (CSV) office located in Sunnyvale, CA. The organizers created a Slack "channel" (a chatroom) that soon included over a thousand members. As plans were evolving, a VP from that office sent the following email to a list of current and former CSV workers:

As many of you know, a group of Comcasters in Philly and CSV are organizing a walkout for tomorrow (Thursday) at 11 Pacific to protest the Trump administration’s immigration policies. The organizers were inspired by the walkouts at Google campuses around the world on Monday.

If you want to participate or learn more about this, join the #walkout Slack channel.

I’m personally extremely supportive of this action. As a grandchild of immigrants, I understand the contribution immigrants from all over the world have made, and continue to make to this country. And I deeply appreciate that our country, at its best, has extended the opportunity for life, liberty and the pursuit of happiness to people in need.

I want to emphasize that this action is being taken by a group of individuals, motivated by their own social and political views. This isn’t a company-sponsored event, and the participants aren’t making any demands of the company. If your views are different, or if you don’t agree with the action for whatever reason, you shouldn’t feel any pressure. We’re supposed to be “the land of the free” so let’s all respect each other’s rights to speak our minds, or stay silent if that’s what feels right.

I learned of this chatroom from that email. There were various informal and heated discussions of this protest by my coworkers, and there seemed to be a concerted effort to exclude me from such discussions. Which is fine by me.

Organizers of the protest had consulted with management and Comcast legal services. They determined that protesters were not allowed to use the Comcast logo or name on any of their signs.

The protest was not mandatory. It was not an official Comcast event, though employees were allowed to take one hour of paid time off to participate.

I decided to counter-protest.

Almost immediately, people began talking to me about the protests, and the consequences of either boycotting or counter protesting. Typically, my response to them was that they should be resolute, and to remember that they are correct on this issue. Here's an atypical response...

The protesters gathered at the plaza in front of the Comcast Center building, as shown in this photo: 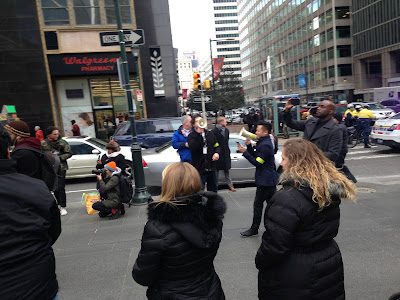 The man on the right with the megaphone used to be my manager. His parents were Vietnamese Boat People. They started a highly-respected restaurant, and are living the American dream. Their son didn't learn.

I stood with a sign that read "#RememberTheVictims" and also held a photo of a man with whom I used to do business, and who was killed in the Orlando night club shootings. I stood in a place where people could see those signs as the left the plaza and headed to City Hall.

I followed them to City Hall, listened to them chat, then again stood in a place where the protesters could see the signs as they returned to Comcast. It was a short protest, management gave them only one hour of PTO.

Of course, my manager, most of my teammates, as well as everyone with whom I sit were against Trump’s executive order, so they were protesting, and they saw me with my signs.

The next day, I was fired. My contracting company said they wanted to continue to work with me, and that Comcast was willing to rehire me for another team.

The reasons for my termination are becoming muddied, and I've already received two different excuses for my termination: one was that I was "unhappy" at my current position, the other that my team wanted an operations person instead of a software developer.

I've been a contractor at Comcast Philadelphia for approximately two years. Near the end of my first year there, they tried to hire me full time, but we were unable to agree on the salary. Before my contract ended, my old manager worked to move me to another team. That new team was dissolved a few months later, and that manager found me a spot with what used to be my current team.

I'm uncertain about working with Comcast in the future. Like all corporations, the chicken choking left hand does not know whom the right hand is wanking. For that reason, I hold no ill will towards the company as a whole.

But I am certain that I can no longer trust them. This is the first consequence for employers who become political, when they stray from the shortest path: doubt is introduced into the employee's mind about any action that management takes. Management undermines themselves, thus revealing their own incompetence.